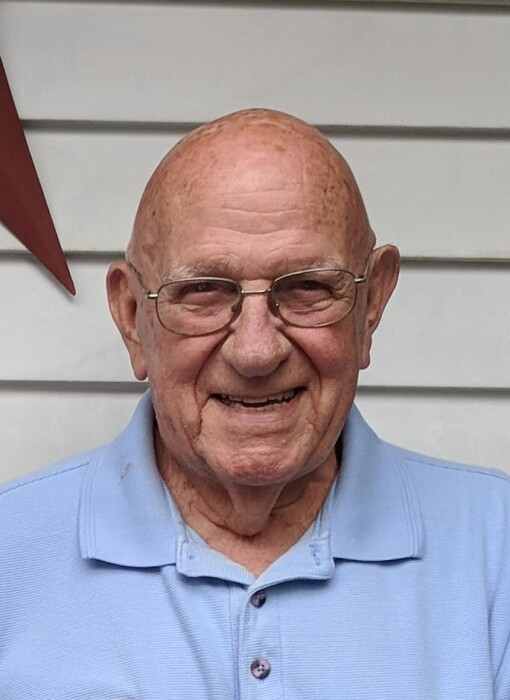 Lee A. D. Oswald, 94, of Allentown, formerly of Slatington, passed away on September 22, 2021.  He was the loving husband of the late Lorraine C. (Kocher) Oswald, who passed away on August 14, 2019.  Born in Whitehall, he was the son of the late Charles and Marian (Buss) Oswald.  Lee enjoyed bowling, golfing and motorcycle riding.  He was a member of St. John’s Lutheran Church in Slatington.  He worked in the Facilities Department at Mack Trucks in Macungie until his retirement.  He was a Navy veteran, having served in WW2.
He is survived by his children, Lee (Dawn) Oswald Jr. and Laurel (Barry) Williams; Son-in-Law, John Sharbaugh; Grandchildren, Shawn (Karen) Patterson, Jess (Latrisha) Oswald, Tyler (Melissa) Oswald, and Brett Williams and his fiancee Pamela Keller; 8 great-grandchildren; 3 great-great-grandchildren; Sisters, Shirley Sulzer and Betty Keiper, and brothers Dale (Loretta) Oswald and David Oswald.  In addition to his wife, he was predeceased by daughter, Donna Sharbaugh, and siblings, Jean Dietrich, Gloria Christman, Ruth Moyer, Blanche Synder, Charles Oswald, Larry Oswald, Gerald Oswald and Warren Oswald.
Private services will be held.  Harding Funeral Home in Slatington is in charge of arrangements.
The family asks that in lieu of flowers, donations be sent to the Veterans of Foreign Wars Foundation, 406 W. 34th Street, Kansas City, MO 64111.

To order memorial trees or send flowers to the family in memory of Lee Oswald, please visit our flower store.