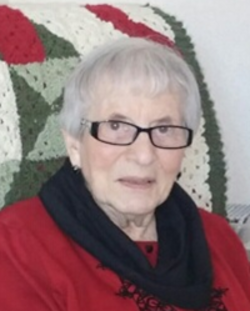 
Angela F. Scarselletti, 88 a resident of Mrs. Bush’s Personal Care, formerly of Slatington died Friday October 16, 2015 at Blue Mountain Health System, Palmerton. She was the wife of the late Angelo Scarselletti, who died in 2010. Born in Philadelphia, she was the daughter of the late Domenic and Theresa (Cortese) Furia. Angela received her BA in music education from West Chester State College, and also a special education degree from Kutztown University. She taught music briefly at Chester School District. She then taught special education for CLIU for 24 years until retiring. Angela taught private piano, organ and voice lessons. She participated in numerous piano concerts throughout Lehigh County and in Philadelphia. She was a member of Assumption BVM, Slatington where she was church organist for 40 years, and was a member of the Altar & Rosary Society. Her last years were spent at Mrs. Bush’s Personal Care Home, where she enjoyed her new friends and continued to entertain the staff, residents and guests with her musical talents.
Survivors: Son;Anthony and his wife Laura of Walnutport. Daughters; Theresa and husband Rodney Lobach of Bath, Annamarie Scarselletti of Souderton, Angela and husband Daniel Shafer of Kunkletown. 6 Grandchildren, 8 Great Grandchildren. Sister; Marie Damiano. She is also survived by 5 grandchildren and 7 great grandchildren through marriage who she thought of and treated as her own.
Services: Mass of Christian Burial 11:30am Saturday October 24, 2015 Assumption BVM 649 W. Washington Street. Calling Hours will be held at Harding Funeral Home, 25-27 N. Second St from 9-11 am. Interment to follow services at church cemetery.

Contributions: In lieu of flowers, can be made to Assumption BVM Memorial Fund.

To order memorial trees or send flowers to the family in memory of Angela Scarselletti, please visit our flower store.