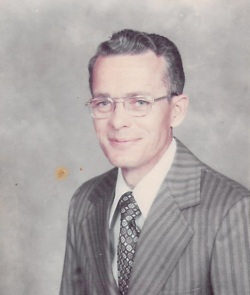 Dale L. Kleintop, 88, formerly of Walnutport, passed away Friday August 4, 2017 at Arden Courts, Wescosville. He was the husband of the late Barbara J. (Frable) Kleintop, who passed in 2016.
Born in Kunkletown, he was the son of the late Leon and Erma (Smith) Kleintop.
Dale served in the U.S. Army during the Korean War from 1951-1953.
He was a graduate of the Penn State University. He worked as an electrical engineer for General Electric, and then for Black & Decker. Following his retirement he worked as a yardman for his son’s business, Blue Mountain Evergreen.
Dale was a member of St. Paul’s U.C.C., Indianland, where he participated in church consistory. He was a member of the Lehigh Township Athletic Assoc., Lehigh Township Lions Club and former treasurer, a charter member of the Lehigh Township Recreation Board and was also a mason.
Survivors: Children: Curtis D. Kleintop and wife Donna of Slatington, David D. Kleintop and wife Linda of Peach Bottom, Wayne P. Kleintop and wife Wendy of Walnutport; Grandchildren: Austin, Deidra, Eric, Jessica, Kristen, and Ryan; Great Grandchildren: Blaine, Chace, Jaxon, Savannah and Emersyn.
Services: 11a.m. Monday August 14, 2017 at St. Paul’s U.C.C., 787 Almond Road, Cherryville. Calling hour 10 to 11 a.m. at the church. Arrangements are being handled by Harding Funeral Home, Slatington.
Contributions: Can be made to Lehigh Township Lion’s Club, c/o the funeral home.

To order memorial trees or send flowers to the family in memory of Dale Kleintop, please visit our flower store.