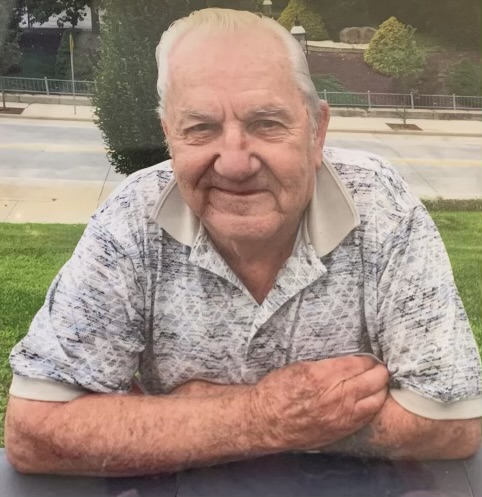 David H. Mosteller, 94, of Walnutport, formerly of Slatington, passed away Monday, January 10, 2022, at Lehigh Valley Hospital, Muhlenberg.   He was the husband of the late Doris J. (Leiby) Mosteller, who passed away in 2007.  Born in Slatington, on December 25, 1927, he was the son of the late Rudolph Mosteller and Elsie P. (Kunkle) Heuschen.  He served his country honorably as member of the US Navy during WWII.  He was employed by the Trojan Powder Co. for 30 years until its closing.  Following that, he worked for Pfizer Co. for 13 years before retiring.   He was a lifetime member of the American Legion Post 16, Slatington.  David was an avid sports fan, and especially enjoyed rooting and cheering for the Northern Lehigh teams, Penn State, Iron Pigs and all Philadelphia teams.
He is survived by granddaughters: Jodi L. and husband Mark Herta of Simpsonville, SC, Lori B. and husband Dennis Christman of Orefield; great-granddaughters: Olivia, Elsie, Gracie, Madison; daughter-in-law with whom he resided: Cindy Bretzik of Walnutport.  David was predeceased by a son, Dennis L. Mosteller, and a brother, Roger Mosteller.
A memorial service will be held at 11AM on Saturday, January 22, 2022, at Harding Funeral Home, 25-27 N. Second Street, Slatington, PA.   Family and friends may visit with the family from 10 to 11AM at the funeral.  Interment will be private, at the convenience of the family.
In lieu of flowers, contributions in David’s name to either St. John’s Lutheran Church Memorial Fund, 40 S. Second St, Slatington or the Northern Lehigh Athletic Department, 1201 Shadow Oaks Ln, Slatington PA 18080.

To order memorial trees or send flowers to the family in memory of David Mosteller, please visit our flower store.