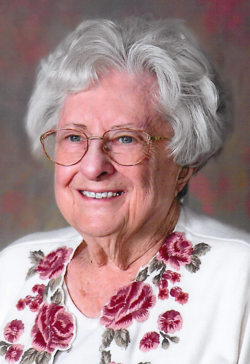 Dorothy F. Boyer, 93 formerly of Slatington, completed her life’s journey surrounded by her family at Weston Senior Living, Kunkletown PA on November 17. She was born January 2, 1922 to Samuel T. Waidelich and Flora (Moyer) Waidelich in New Tripoli PA. Dorothy’s love in her life have been her family, her faith, her friends, her card group, baking and cooking, and her flowers. We have been blessed with the depth of Dorothy’s love for us and the memory of her touching our lives, her wit and intelligence charmed those she knew. Dorothy’s husband Alden F. Boyer passed away July 25, 1973. Dorothy graduated from Slatington High School in 1938 as salutatorian after skipping grades in elementary school. She won the prestigious award of the fastest and most accurate typist in the state of PA in 1938. During WWII Dorothy was part of an elite group of civilians whose duty it was to spot planes for the government that might travel inland after the attack on Pearl Harbor had occurred. She manned an observation tower watching for any aircraft that might pose a threat to the U.S. Marrying Alden in 1946 and moving to Slatington as owners and operators of A.F. Boyer Hardware. She handled the secretarial aspects of the business. Active in Eastern Star for many years Dorothy was worthy matron in 1963-1964, and stayed involved with the Past Matrons/Patrons and Star Dusters groups, a member of the Slatington American Legion Auxiliary Post 16, also a member of St. John’s UCC Second Street Slatington. She continued to run the hardware store after her husband’s death, and until her son Allan was able to take it over, not a small feat since the business had grown considerably over the years. We give thanks as we remember Dorothy’s love for us and how it shaped our lives. She will be deeply missed by her loving family.
Survivors: Children; Linda wife of Clifford Williams, daughter Nancy, wife of Lonnie Haydt, and son Allan and his wife Debra (Masters) Boyer. She is also survived by grandsons, Tyler A. Haydt and Abel F. Boyer, great granddaughter Adalyn Haydt, predeceased by grandson Asher F. Boyer and siblings Harry and Archie Waidelich and Sadie Snyder.
Services: 11am Friday November 20, 2015 Harding Funeral Home, 25-27 N. Second St, Slatington PA. Calling hour 10-11am at the funeral home. Interment to follow at Union Cemetery, Slatington.
Contributions: In lieu of flowers, contributions are suggested to St. John’s UCC Endowment Fund, 15 S. 2nd Street, Slatington PA

To order memorial trees or send flowers to the family in memory of Dorothy Boyer, please visit our flower store.