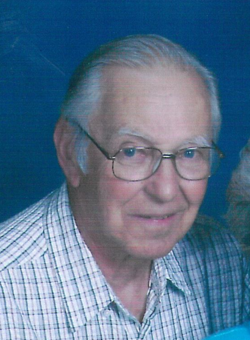 Douglas M. MacCrindle, 85 of Slatington passed away peacefully on Monday August 7, 2017 at his residence. He was the husband of Carol (Roderick) MacCrindle; they celebrated their 61st anniversary this past July 14.
Born in Palmerton, he was the son of the late James M. and Dorothy (Handwerk) MacCrindle.
He was a graduate of the Slatington H.S. Class of 1949, and served on the reunion committee. He earned his BS in Art Education from Kutztown University in 1953. He worked as an art teacher for the Palmerton Area S.D., teaching grades K-8 before retiring in 1986. Following his retirement, he painted for Curtis Schneck & Don Messinger, and taught adult art classes in Palmerton.
Doug was a member of St. John’s Lutheran Church, Slatington, where he participated on church council and the property committee. He was also a member of the Lehigh Valley Scottish Society and the Clan Donald USA for many years. His favorite things to do were to attend the Scottish Games, and spend time with his family. He was a life-long Boston Red Sox fan.
Doug’s family would like to thank Michelle’s Helping Hands for the care which they provided.
Survivors: In addition to his wife Carol, Daughters: Megan and husband Jody Bellesfield of Palmerton, Heather and husband Brian Zimmerman of Edinboro, PA , Beth Ann and husband Chris Heilbock: Grandchildren: Egan MacCrindle Bellesfield, Andrew MacCrindle Zimmerman and wife Alexandra, and Allyson Lewis; Brother: Colin MacCrindle; Many nieces & nephews.
Services: 11 A.M. Saturday August 12, 2017 at St. John’s Lutheran Church, 40 S. Second St, Slatington. Calling hour 10 to 11 A.M. at the church. Arrangements are being handled by Harding Funeral Home, Slatington.
Contributions: In lieu of flowers, donations may be made to St. John’s Lutheran Sunday School Fund.

To order memorial trees or send flowers to the family in memory of Douglas MacCrindle, please visit our flower store.