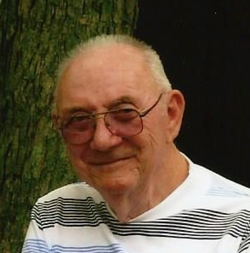 Earl J. Evert, 87 formerly of Slatington died Monday August 24, 2015 in Manor Care Nursing Home, Allentown. He was the husband of the late Millie F. (Zellner) Evert who died in 2013. Born in Walnutport, he was the son of the late Earl S. and Eva S. (Eckhart) Evert. He honorably served in the US Army Air Corps during WWII. Earl was a bakery truck driver for the former Fritzinger’s Bakery and Freihofer’s Bakery. He later worked for the American Nickeloid in Walnutport. He was a member of Bethel UCC, Slatington.
Survivors: Daughter; Sheila M. wife of Robert W. Wimmer of Macungie. Son; Dennis E. Evert, and Wife Dianna of Walnutport. Grandchildren, Bradley of Munich, Germany, Brenda of Walnutport, and Mei of Macungie. Great-Granddaughter Sariah. He was pre-deceased by his sister Ethel Bisko
Services: 11:00 Thursday August 27, 2015, Harding Funeral Home 25-27 N. Second St Slatington. Calling hour 10-11:00 am at the funeral home. Interment will follow calling hours at the Union Cemetery Slatington.
Contributions: In lieu of flowers, can be made to the. Bethel UCC, c/o the Funeral home

To order memorial trees or send flowers to the family in memory of Earl Evert, please visit our flower store.