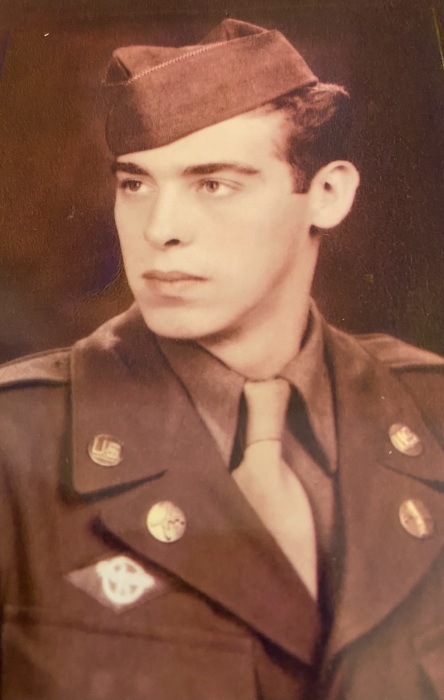 Edward James Fitzgerald, 92, passed away peacefully in his home on October 28, 2021, with his loving family by his side. He was a beloved son, brother, husband, father, grandfather, and great-grandfather. Edward “Ed” was born on February 21, 1929, in Pittsburgh, PA, the son of Elizabeth M. and James S. Fitzgerald.
Edward was a proud veteran of the US Army. He was an MP in Korea, where he served with the 55th Military Police Company and was awarded the World War II Victory Medal. The 55th was active in Korea from March 1947 to June 1949.
Ed learned welding while working at J&L Steel in Pittsburgh, PA. Later, he went to work at Mack Trucks after moving to the Allentown area and continued to work for Mack until his retirement in 1991. He started there as a welder, then studied sheet metal layout and became a sheet metal layout man and eventually a machinist. He worked at the former Assembly Plant 5C in Allentown, then at Mack’s Macungie plant when that site opened. He was a proud member of UAW Local 677.
One of Ed’s greatest interests was Ham Radio. He studied Morse Code and went on to pass his test to earn the highest possible FCC amateur radio operator license, that of “Amateur Extra Class”. In order to pass that test, he was required to accurately transmit/receive 20 wpm in Morse Code. As a ham operator, a “Ham” as they are known, he enjoyed communicating with other “Hams” around the world under his call sign, WB3JLC.
Another of his favorite hobbies was studying and collecting rocks, minerals, and fossils. He was an enthusiastic “Rock-Hound”. He and his wife, Lois embarked on many enjoyable road trips in search of perfect mineral and fossil specimens.
Ed was an accomplished guitar player and his family will fondly remember the many enjoyable hours spent listening to his playing and singing. He played both acoustic and electric guitar. He also loved listening to music, especially guitar music. Some of his favorite artists were Eric Clapton and Leon Redbone. In later years, he really enjoyed listening to polka music and watching Pennsylvania Polka each week on TV.
Ed enjoyed fishing in his younger years, especially when his dad would come to visit. They would head for the shore to do some surf fishing, or to a PA lake and fish from his boat. Ed also enjoyed raising chickens and had many breeds through the years, including leghorns, silkies, bantams and guinea fowl. His summer activities always included cutting the fields on his unique, beloved, vintage Cletrac tractor and his John Deere mower.
Ed was an avid Nascar fan, and you could not get his attention if a race was on TV that day. His favorite driver was, of course, the late #3 Dale Earnhardt.
Ed loved Ireland and all things Irish, and in 1974 he finally realized his dream of travelling to visit the land of his ancestors with his wife, Lois by his side. His trip to Ireland was by far his most memorable vacation and the photos they brought back were breathtaking.
Ed was truly a self-made man. Besides the accomplishments and interests listed above, he was talented in so many other areas: construction, masonry, plumbing, electrical, roofing, siding, small gasoline engine repair, auto and truck repair. He could fix anything by welding it and could create something just by looking at an example. He was artistic and had the most beautiful and distinctive handwriting. He had a great sense of humor and could always tell a good joke. He would do anything for you and was always there to lend a helping hand if someone needed it. He will be sorely missed by his family and all who knew him. We are sure that as a ham radio operator, he would be signing off to his family and friends with “seven three” which means a “fond farewell”.
Survivors: Beloved wife of 72 years, Lois G. (Klotz) Fitzgerald. Son, Michael T. Fitzgerald, Walnutport. Daughters:  Colleen L. wife of Richard Roberts, Hamilton, NJ; Denise A. wife of Travis Hood, Bellingham, WA; Susan E. Hayes, Staunton, VA; and Maureen F. wife of Richard Bet, Walnutport.  Grandchildren:  Dr. Gina M. Roberts; Ashley L. wife of Jeffrey Talbot; Bonnie G. Hood; Patrick F. Hayes and wife Tracy; Sean D. Hayes; Kelly E. Eastley; Kathleen M. wife of John Dusenbury; Michael A. Bet; Joseph E. Bet and wife Shannon; and Jennifer L. Bet. Great Grandchildren: Daniel, Delaney, Madeline, Braelynn and Abigail. Sister: Mary Anne Durant of Magalia, CA.  Brothers: Thomas “Bud” Fitzgerald (predeceased), and Paul “Gerry” Fitzgerald (predeceased).
Services:  A celebration of life service will be announced by the family at a later date.  Arrangements are being handled by Harding Funeral Home, Inc., 25-27 North 2nd Street, Slatington, PA.  Contributions can be made to Promedica Hospice Memorial Fund (Allentown, Pa location), 333 North Summit Street, P.O. Box 10086, Toledo, OH, 43699-0086.

To order memorial trees or send flowers to the family in memory of Edward Fitzgerald, please visit our flower store.