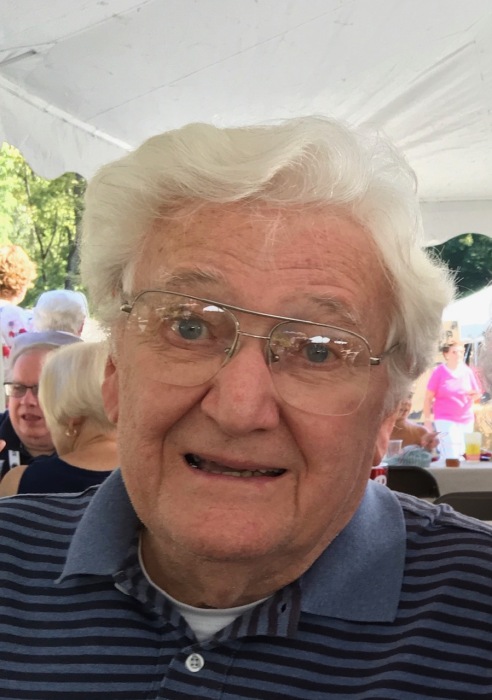 Elwood “Pepper” Scherer, 96, formerly of Slatington, passed away Saturday morning, June 6, 2020 at Sacred Heart Assisted Living, Northampton.  He was the husband of Doris (Snyder) Scherer, whom he married October 21, 1950.   Born in Emerald, on October 29, 1923, he was the son of the late Elmer and Katie (Brobst) Scherer.
He was a big fan of Johnny “Pepper” Martin, a St. Louis Cardinals Hall of Famer, and in his softball playing days, he would refer to himself as Pepper Martin; the nickname Pepper has stayed with him ever since.
Pepper was a Pharmacist’s Mate, Second Class, US Navy, aboard the USS Sanctuary, stationed in the Pacific Theater during WWII.
He worked for many years for the former Western Electric, retiring as a dry reed switch operator.
Pepper was long time active member of St. Peter’s United Methodist Church, Emerald, where he was superintendent of their Sunday School and taught adult male classes for many years.   He was also a cub scout leader for the former Emerald Troop.
In addition to his wife Doris, Pepper is survived by a daughter Beverly Zeiser and husband Edward Donnelly of Slatington; son: Brent Scherer of Slatington; He was an uncle, a great uncle and a great-great uncle to his nieces & nephews.
A visitation will be held from 10 to 11 AM on Wednesday, June 10, 2020 at Harding Funeral Home, 25-27 N. Second St, Slatington PA (we kindly ask you wear a mask and observe social distancing).   Funeral service and burial will be private.   In lieu of flowers, contributions can be made to either St. Peter’s United Methodist Church, 7860 Center St, Emerald 18080 or Family Pillars Hospice, 3910 Adler Pl, Bethlehem PA 18017

To order memorial trees or send flowers to the family in memory of Elwood Scherer, please visit our flower store.