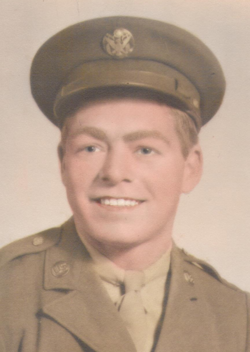 Floyd J. Hoppes, 90 of Slatington died Monday October 19, 2015 in his home. He was the husband of the late Christine E. (Peters) Hoppes, who died in 2005. Born in Slatington, he was the son of the late Leon F. and Helen R. (Frantz) Hoppes. Floyd served his country honorably in the US Army; and was involved in the Battle of the Bulge. He was the owner/operator of Lehigh Stone until his retirement in 1989. Floyd was also part owner of Pleasant Hills Gold Club in Fleetwood. He was a member of the Neffs, UCC, Grouse Hall Fish & Game Assoc, Ironton, the American legion Post 16, Slatington and the Slatington Skeet Club. Floyd was an avid golfer, hunter and enjoyed bowling.
Survivors: Sons; Floyd A. Hoppes, Jr. and wife Linda, Donald G. Peters and wife Tish all of Slatington. 9 Grandchildren, 22 Great Grandchildren, and 9 Great Great Grandchildren. Brother; Charles Hoppes and wife Dorothy of Slatington. Nieces & Nephews. He was pre-deceased by a daughter Marie Anderson, and siblings Robert Hoppes, Sr., Lillian Dunbar and Violet “tootie” Roth.
Services: 11am Friday October 23, 2015 Harding Funeral Home, 25-27 N. Second St, Slatington. Calling hour 10-11am at the funeral home. Interment to follow at Neffs Union Cemetery.
Contributions: In lieu of flowers contributions are suggested to American Legion, Post 16, 510 Main St, Slatington PA 18080.

To order memorial trees or send flowers to the family in memory of Floyd Hoppes, please visit our flower store.