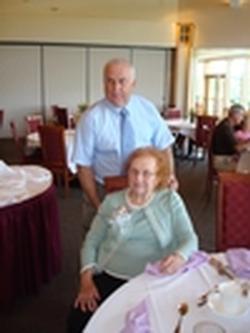 
Gladys Mae DeFrain, 92, of Sharon Drive, Slatington, went home to the Lord on Saturday, April 7, 2012. Born September 5, 1919 in Slatington PA, Gladys was the daughter of the late Matthew and Annie (nee Tyrer) Jones who emigrated from Wales in 1911. Gladys was the wife of the late Raymond W. DeFrain, Jr., founder of DeFrain Electric, who died in February 1986. Gladys worked 11 years at Slatedale Knitting Mill prior to working with her husband in the family business and raising her family. Gladys was a lifelong member and matriarch of the Slatington Baptist Church for 74 years, sharing her marvelous alto voice on the choir for over 50 years. She was a long term member of American Baptist Womens Association serving as their secretary for many years. She also was active in Boy Scout Troop 66 Auxiliary again serving as secretary for many years. She graduated from Slatington High School in 1938 and had been active on the reunion committee. Survivors: Ninny as she was known to all that knew and loved her is survived by her sons Raymond M., Sr. and his wife Kathryn, David and his wife Susan, Richard and his wife Karen and devoted daughter Carol Ann DeFrain, with whom she resided. In addition to her children, she is survived by her grandchildren Anoure Fenstermaker and her husband Robert, their children Rhys and Sadie, Elizabeth Martlock and her husband Douglas and their daughter Olivia Mae, Jonathan DeFrain, Melissa DeFrain and Raymond DeFrain Jr. and his wife Allison; step granddaughter Samantha Seibert and her husband Michael; sister Annie Szapacs, formerly of Slatington; nieces and nephews as well as many dear friends. She was predeceased by her daughter Nancy Carol and her brother Matthew Jones. Services: Will be held at the Slatington Baptist Church on Saturday, April 14 at 11 a.m. with the Reverend James LeVan and Pastor Henry Distler presiding. Calling hour 10-11 a.m. at the church. Family and friends are invited back to the Church Social Hall following the interment at Fairview Cemetery. Harding Funeral Home is in charge of all arrangements. Contributions: In lieu of flowers, contributions can be made to the Slatington Baptist Church in care of the Gladys M. DeFrain Memorial Fund.

To order memorial trees or send flowers to the family in memory of Gladys DeFrain, please visit our flower store.