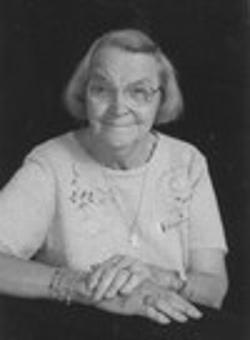 Mabel V. Thomas, 88, of Walnutport, passed away August 20, 2012 in her home. She was the wife of the late Joseph D. Thomas. Born in Portsmouth, VA, she was the daughter of the late Harrison & Bertha (Magerstadt) Ellis. Mabel worked at the former Paris Neckware for 24 years as a sewing machine operator before retiring. She was a volunteer at Phoebe Home for 40 years, was member of the Diamond Fire Company Women's Auxiliary, Women's Club and the Slatington Legion Auxiliary. She was a member of St. John's UCC, in Slatington where she was in the choir for 65 years and she also attended the Slatington Baptist Church for numerous years.


To order memorial trees or send flowers to the family in memory of Mabel Thomas, please visit our flower store.