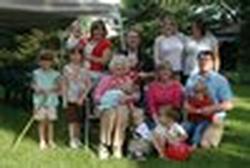 
Phyllis M. Thomas, 100 of Lafayette Hill formerly of Slatington, died Saturday January 5, 2013 at Spring Mill Village. She was the wife of the late Dr. Marvin R. Thomas, who died in 1974. Born in Slatington, she was the daughter of the late Dr. Charles H and Minnie (Roper) Muschlitz. During WWII, she was a member of the Army Observer Corps, a civilian group who at night went out to spot planes. Phyllis was a housewife until her children graduated High School. She then worked as a nursery school teacher for the former LARC until the age of 69. Phyllis learned to dance at an early age, and taught classes in the Slatington area. She was a harpist, who studied at Wellesley College and the Philadelphia Conservatory of Music. Phyllis was an avid bridge player, and enjoyed playing up until this past summer. As a member of the Slatington Women's Club, Phyllis would open her home for quilting pillows depicting Slatington landmarks as a money making project for the club. She was a lifelong member of St. John's UCC; and had previously been a Sunday School teacher, and played on the Bell Choir.


To order memorial trees or send flowers to the family in memory of Phyllis Thomas, please visit our flower store.