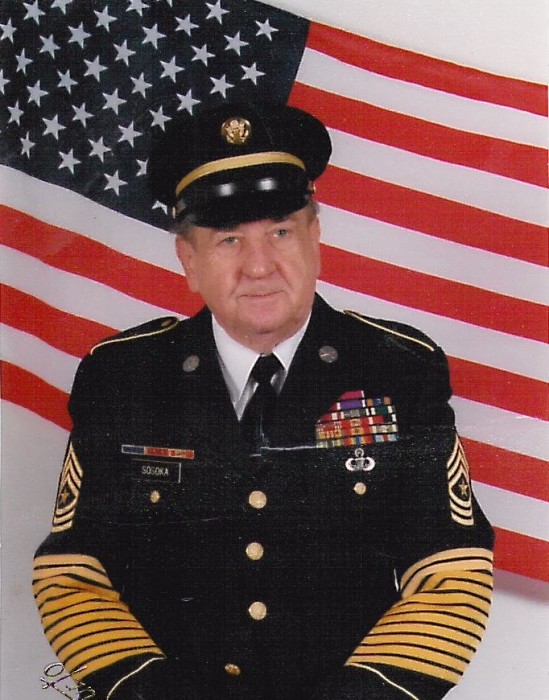 Richard Joseph “Stretch” Sosoka, 86, of Slatington, passed away Sunday, July 8, 2018.  Born in Slatington, he was the son of the late Frank and Mary Sosoka.  He was a graduate of Slatington High School, Class of 1949 and attended Muhlenberg College.  Richard was a member of the PA National Guard.  A highly decorated combat veteran, he retired from the US Army with the rank of Sergeant Major, with 33 years of service.  His numerous decorations include the Legion of Merit and two Purple Hearts.  He was a master parachutist.  He served in Korea and had three tours in Vietnam.  Stretch served a total of ten overseas tours.  His last tour of duty was at Drexel University Senior ROTC as a senior ROTC instructor.  After retiring, he was employed at Drexel University as the university property controller for two years.  He was a member of St. John’s Lutheran Church, Slatington.  He was a life member of the VFW Post 7512, and a member of the Diamond Fire Company, Walnutport, the Slatington Vigilant Fire Company #2, the American Legion Post 16, the Moose Lodge 1375, and the Skeet Club Slatington, as well as the Saegerbund, Club of Coplay.  Stretch was also a 32nd degree Mason of the Slatington Lodge 440 F & AM, a member of Lehigh Consistory, Allentown, Rajah Shrine AAONMS, and the Rajah Shrine Oriental Band, Reading.
Richard is survived by sisters: Ruth DeForrest of WI, Jean Lavelle of Coopersburg, and many nieces, nephews & cousins.  He was preceded in death by sisters, Arlene Koran and Shirley Polzer.
A funeral service will be held at 11 A.M. on Monday July 16, 2018 at Harding Funeral Home, 25-27 N. Second St, Slatington.  Calling hour 10 to 11 A.M. at the funeral home.  Masonic service to be held at conclusion of calling hour.  Interment with military honors to follow at Union Cemetery, Slatington.
Contributions in his name can be made to either Shriner’s Hospital for Children or Rajah Shrine Oriental Band “Ladder of Smiles”, c/o John Grumbein, 7520 Trexler Circle, Trexlertown PA 18087

To order memorial trees or send flowers to the family in memory of Richard Sosoka, please visit our flower store.