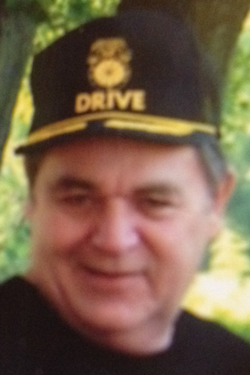 
Robert J. Flexer, 73 of Slatington died Sunday April 26, 2015 at Blue Mountain Health System, Palmerton Campus. He was the husband of Patricia A. (Jones) Flexer; they celebrated their 51st wedding anniversary last December. Born in Slatington, he was the son of the late John R and Goldie (Paules) Flexer. Robert was a US Army veteran and was stationed Korea. He worked for the American Nickeloid for many years before retiring. Prior to that, he worked for various construction companies including Brookhaven Homes. Following his retirement, he worked part time at the Weis in Schnecksville, and also at the Diamond Fire Co. Walnutport. Robert was a life member of the Slatington Skeet Club, the Vigilant Fire Company, and the Emerald Star Hose Co. 1. He was also a member of the VFW and Diamond Fire Co. both in Walnutport, and the Coopechan Fish & Game Club.
Survivors: Wife, Son; Brian Flexer and companion Kelly. Daughter; Bobbi Jo and husband Troy Kline all of Slatington. Grandchildren; Adam Flexer, & Chance Delong. Sisters; Joyce Smith, Gloria Martin both of Slatington, and Linda Wieand of Bethlehem. Nieces, nephews, & cousins. He was pre-deceased by siblings James O. Flexer, and Joan Kroboth.
Services: Graveside will be held 11:30am Thursday April 30, 2015 Union Cemetery, PA Rt 873 Slatington. No Calling hours. Arrangements Harding Funeral Home, Slatington
Contributions: In lieu of flowers contributions can be to Wounded Warrior Project, 4899 Belfort Rd, Suite 300 Jacksonville Fl 32256

To order memorial trees or send flowers to the family in memory of Robert Flexer, please visit our flower store.