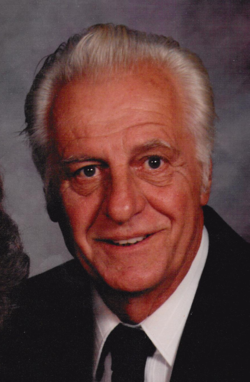 Robert J. Harwi, 82 of Slatington died Monday October 24, 2016 in his home surrounded by his loving family. He was the husband of Nina L. (Wentz) Harwi, they celebrated their 60 the wedding anniversary December 24, 2015. Born in Friedens he was the son of the late Ralph J. and Florence (Remaley) Harwi. He was a member of Friedens Church UCC, friedens. Skip served in the army during peacetime. He worked for Mack Trucks, in the Macungie plant as an AAA mechanic for 30 yrs before retiring in 1984. Owner/operator of R.J. Harwi & Sons Green Houses for many years. Became sole owner of Pleasant Hills Golf Course, Fleetwood in 1995, till present. Skip was an Avid Golfer, and an all sports Philadelphia Fan.
Survivors: Wife, Son Robert J. Harwi II, and wife Cindy, of Fleetwood. Daughters, Cynthia L. wife of Randy A Biege, Slatington., Cathi J, and the late Lee D. Zelllner, Whitehall, Lisa A. and Fiancée Dennis H. Laudenslager, Allentown.11 Grandchildren. 1 Pre-deceased Granddaughter, Amanda M. Mack, and 6 Great Grandchildren. Sister, Elaine Steigerwalt, Bowmanstown. Pre-deceased Brothers, Richard, and William.
Services: Memorial Service will be held 10:30 am, Friday October 28, 2016 in Harding Funeral Home, 25-27 N. Second Street, Slatington. There will be no calling hours. The Family will receive Relatives and friends in the Friedens Fire Co following the Memorial Service.
Contributions: In lieu of flowers, donations can be made to, Friedens Church UCC, 7227 Pa RT 873, Slatington, Pa 18080
To order memorial trees or send flowers to the family in memory of Robert Harwi, please visit our flower store.