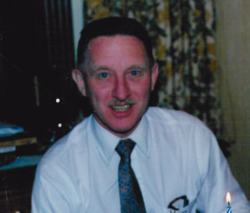 
Ronald E. Hofmann, 72, of Slatington, passed away January 28, 2016, at St. Luke’s Hospital of Fountain Hill. He was the husband of Deborah A. (Mazur) Hofmann; they celebrated their 11th wedding anniversary this past July. Born in Palmerton, he was the son of the late Edward F. and Florence C. (Behler) Hofmann. He was a member of United Presbyterian Church, Slatington. Ron was a transportation manager for American Nickeloid of Walnutport. He also worked for Landis Transportation and U.S. Foods until he retired in 2006. Ron was the recipient of the Outstanding Young Man of America award in 1972. He was the past president and member of NL Jaycees and the past president and director of Traffic Club of the Lehigh Valley. Ron was also a member of Delta Nu Alpha Transportation Fraternity, a member of Blue Ridge Country Club, and former member and past president of the Rotary Club of Slatington. Ron was also an avid Navy football fan who enjoyed driving his convertibles. Survivors: Wife, Deborah; son, Michael Hofmann & wife Lisa of Slatington, Daughter, Dena Hofmann of Danville, Stepchildren, Dennis Foberg, Jr.and wife Nicole,Jessica Foberg, Grandchildren Michael Hofmann Jr. and Aaron Hofmann, Step grandchildren, Gianna, Ethan, and Jordan, Uncle, Matthew Behler, and a niece, nephew, and cousins. He was predeceased by his brother Richard Hofmann.
Services: 11 a.m., Tuesday, February 2, 2016 at Harding Funeral 25-27 N. 2nd St., Slatington, PA. Calling hour 10 a.m. - 11 a.m. at Harding Funeral Home.
Contributions: Are suggested to his granddaughter Gianna Vought, c/o National Penn Bank 4933 PA Rt 873 Schnecksville PA 18078

To order memorial trees or send flowers to the family in memory of Ronald Hofmann, please visit our flower store.