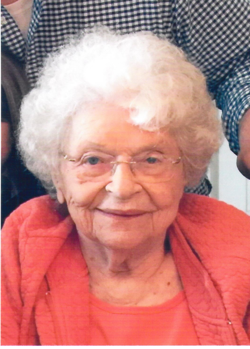 Ruth Sterner Sell, 94 of Slatington passed away July 8, 2017 in her home. She was the wife of the late Roger P. Sell, who died in 2006. They owned and operated the Slatington Airport. She was active with local garden clubs and was an award winning flower show participant. She was also an avid bird watcher and did not miss a Philly game on TV.
Survivors: Son; Roger S. “Corky” Sell and wife Linda of Schnecksville. Grandchildren; Christopher Sell and wife Traci, Steven Sell and wife Tracy. Four Great Grandchildren.
Services: 2:00pm Friday July 14, 2017 St John’s Lutheran Church, 40 S. Second St, Slatington. No Calling hours. Interment to follow at Union Cemetery. Arrangements Harding Funeral Home, Slatington
Contributions: In lieu of flowers, contributions in her memory may be made to the church.

To order memorial trees or send flowers to the family in memory of Ruth Sell, please visit our flower store.