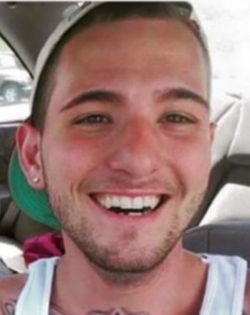 Stephen W. “Dat Marsh Kid”, 20 of West Hazelton died Monday May 23, 2016 in his home. Born in Allentown, he was the son of Christine (Appel) Marsh of Slatington and William Marsh of West Hazelton.
A life that’s wasted, a breath that’s gone, he knows he’s been fighting this addiction too long. He says he’s sorry, he says he’ll try, he thinks of a prayer and looks up to the sky. It hurts so much, he just can’t stop, he shoots the drugs until he drops. He drops his hopes, he drops his sprits, his soul cries out, you just can’t hear it. A life that’s wasted, a breath that’s gone, the results of heroin, he just couldn’t move on. He slowly lets go, he slowly is dying, he takes his last breaths and quickly starts crying. His life is gone now, wasted away. The day his life ends, today is the day.
Survivors: Parents, Sisters; Tabitha& Sabrina Marsh of Slatington. Brother; Jarrett Hausman of Neffs. Girlfriend; Elizabeth Monteiro. Maternal Grandparents; Eileen & Mike Sutton of Walnutport.
Services: 7:30pm Tuesday May 31, 2016 Harding Funeral Home, 25-27 N. Second St, Slatington. Calling hour 6-7:30pm.
Contributions: In lieu of flowers, contributions can be made to the funeral home to help defray funeral costs.
To order memorial trees or send flowers to the family in memory of Stephen Marsh, please visit our flower store.